Created to promote well-being and quality of life for employees, the group has already performed at important institutions in the city.

Strengthen the connection with you and the world. This is one of the best known benefits for those who carry out some artistic activity. In order to provide an activity capable of improving the quality of life of its employees, the Escola Bahiana de Medicina e Saúde Pública created, ten years ago, the choir sings Bahiana. The group's history brings an uncountable number of presentations not only at the institution's events, but in important points of the city, taking the art to the most diverse audiences. Over a decade, there were exhibitions at Hospital Aristides Maltez, Salvador Shopping and Shopping Itaigara, solemn sessions at the City Council of Salvador, opening of congresses, closing events, graduation masses of Medicine of the Bahiana, presentation on the anniversary of Bahiana at Teatro Castro Alves.

The choir won the city!

According to maestro Carlos Veiga, artistic manager and manager of the choir since its inception, there are many benefits provided by the practice of singing: "Contact with music through the choir provides the individual with the musical development of the voice, musical perception, rhythm, tuning and, in addition, it develops extra-musical aspects such as concentration, discipline, self-esteem and the socialization of those more shy individuals". And that was the case of the collaborator of the Copa Campus de Brotas Maria José Alves, chorister since the first formation of the group. with 20 years of Bahiana, she says that before participating in the choir Canta Bahiana, he always watched the performances of his sister, a member of the Hospital Aliança choir: "I always watched my sister's performances and I really wanted to sing. Bahiana, I subscribed. And I'm on it to this day. It was one of the best things in my life. I was very shy before, today I talk a lot. I love to talk".

Among the most emotional moments of her career as a chorister, Maria José highlights a performance at Hospital Aristides Maltez and another at Teatro Castro Alves in honor of 65 years of music. Bahiana. "It was very good to bring joy to those people who were there, sad for their health condition. There were so many stages, so many places I visited because of the choir... I never imagined that one day I would sing at Teatro Castro Alves!"

The benefits are also highlighted by the planning analyst (ASPLAN), Maristela Silva. "At first, I only perceived the benefits in the other participants, as I heard several reports from them about the good the choir did. The fact of singing and the interaction with the group relieved the daily tensions. I started to observe myself and noticed that I really felt lighter at each rehearsal," he says.

Another choir enthusiast is Paôla Oliveira, a Relati collaborator for 7 years and a member of Canta Bahiana there are six. "I was thrilled when I watched a Christmas video of the Choir that was posted on the website of Bahiana. I already wanted to sing, but watching that video was the fact that motivated my participation in the Choir.” Among the positive points of participating in the choir, she highlights the group's unity and well-being after a day's work.

Even with the quarantine adopted by the institution as a preventive measure against the COVID-19 pandemic, the choir keeps its rehearsals, through online meetings, via the Zoom platform.

"The choir is the best place to develop your voice, whether you are a beginner or an expert in singing. The practice of choral singing has proven to be efficient in the musicalization of many people who, before participating, considered themselves voiceless", says conductor Carlos Veiga. 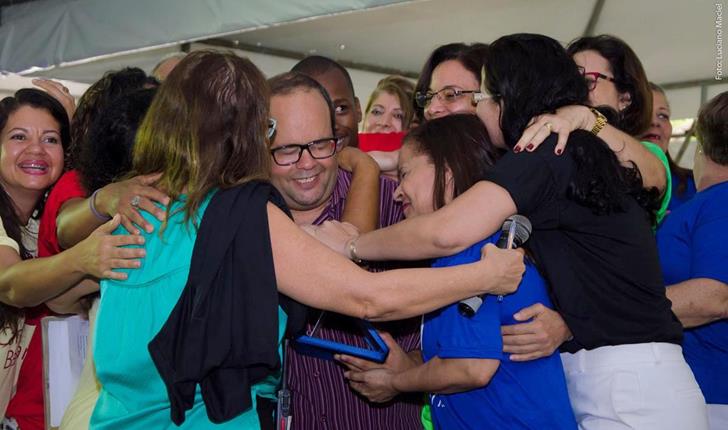