New from Bahiana brings together academics from 2019.1

The event that welcomed the freshmen of the first semester had the theme ?A Gente Pela Paz?.

"People for Peace” was the theme of the first edition of 2019 of New from Bahiana. The freshmen reception took place on the morning of February 1st, at Campus Cabula, and was attended by guest speakers, professors and managers. Among them are the coordinators of undergraduate courses Clárcson Plácido (Physical Education), Geraldo Argolo (Biomedicine), Simone Passos (Nursing), Luciana Oliveira (Common Nucleus), Luciana Billitário (Physiotherapy), Ana Verônica Mascarenhas (Medicine), Sylvia Barreto ( Psychology), Urbino Tunes (Dentistry), in addition to the financial director of Bahiana Emanuel Olympio. 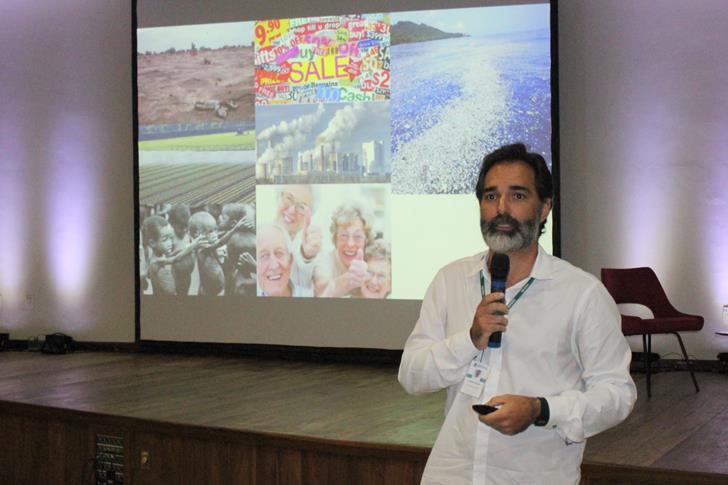 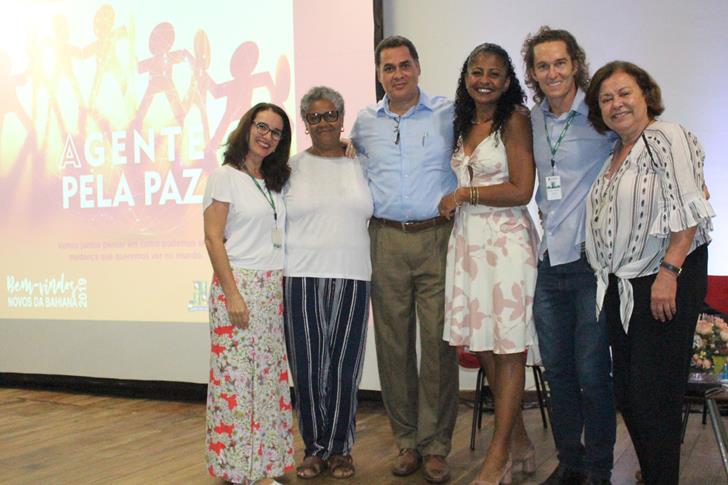 The schedule brought as speakers Charles Howard, (INPAZ – National Institute of Education for Peace and Human Rights) who, in his speech, addressed the influence of culture on the way human beings act and think, Jamira Muniz (coordinator of Espaço Cultural Alagados), who spoke about her experience and the importance of having empathy, especially when you are a health professional, and Rita Dias (UFRB professor), who demonstrated how the construction of family biographies can help to understand social concerns, contributing to a culture of peace.

Luiza Ribeiro, People Development coordinator, opened the meeting, a moment in which she remembered the 68 years of Bahiana, which will be completed on May 31, in addition to emphasizing the theme of the event, highlighting it as a factor of change. The program also had a show by the Choir “Canta Bahiana". 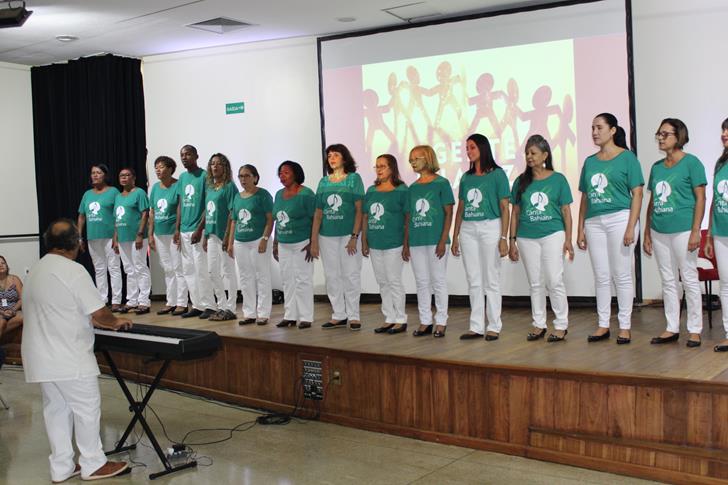 "We work with the reception schedule and with the New from Bahiana always with the perspective of favoring an environment that allows the student to feel welcomed on their new journey. We believe that welcoming, presenting objectives and institutional goals are fundamental factors so that students can feel connected to the place where they chose to study”, describes Maria Angélica Mendes, coordinator of the Pedagogical Care Center (NAPP).

She highlighted that, each year, the proposal to welcome students becomes more important and that the effort is to make it a moment of celebration and joy. As for the topic, Angelica explains that the choice was very natural, because every year something that generates mobilization and raises reflection from the institutional movement of the previous year is selected: “we are always discussing inclusion, diversity, respect, and peace is a necessity for our transformation movement”.

Also as a way to present the sustainable model of Bahiana, the coordinator of Social Impact Business André Soliani brought to the fore the environmental catastrophes caused by man's actions. At the end of his presentation, a discussion on the subject was held. The aim was to arouse attention, the sense of revolution and the desire for positive change in freshmen.

For André, the purpose of the meeting is the cultivation of peace, since "we live in a violent world, in which the decisions taken affect not only the human species, but also the diversity of other species". The coordinator also added that taking an attitude in relation to this context is part of an individual decision and, as freshmen will learn to take care of each other's health, it is important to have a synergistic view of the world from now on.

Luiza Ribeiro points out that, when dealing with this theme, “A Gente pela Paz”, there is a pun, being “we like us and we as agents of peace”. According to her, the message coincides with the student's search for a future health professional. “This reverberates to other instances of the community. Therefore, the Bahiana he wants to join this revolution proposed by André Soliani and all the other coordinators to strengthen ethical and moral values ​​aimed at the collective good”, he adds. 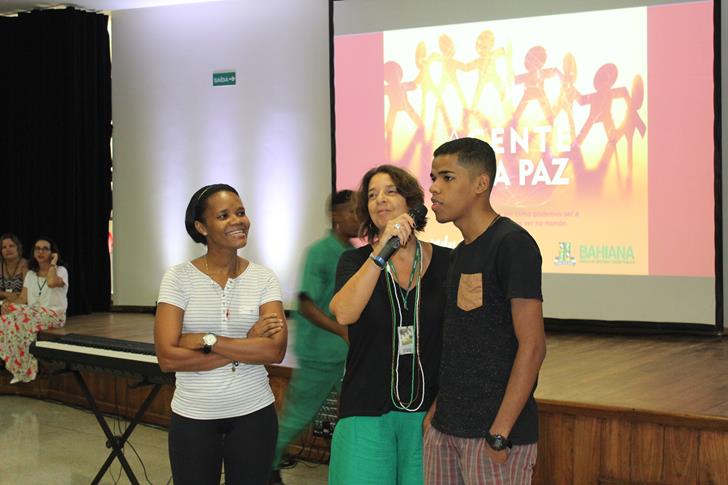 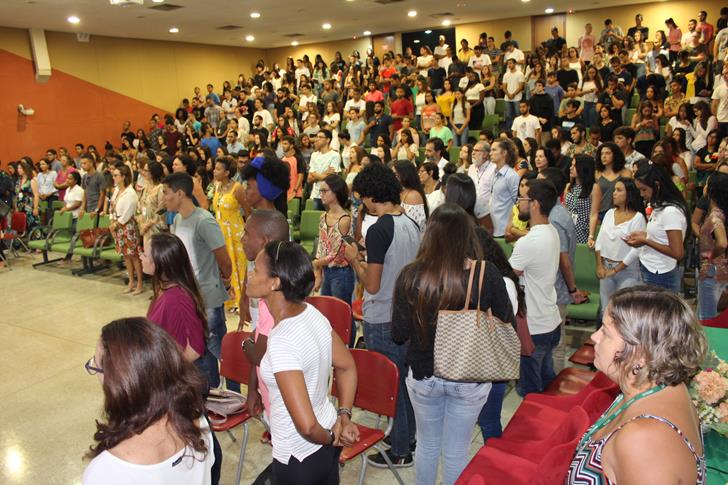 The speaker Rita Dias, a professor at the Federal University of Recôncavo da Bahia (UFRB), considers that discussing the culture of peace with freshman students from 2019.1 is extremely relevant, as this creates a greater bond between the different courses, in addition to to promote a contemporary and necessary debate, prioritizing protagonism in relation to academic, social and political education: “This initiative demonstrates the engagement and social and political commitment that the institution has. The promotion of a culture of peace is related to the reduction of inequalities and proactive action in favor of justice and equity. Therefore, I am very pleased to participate and witness the commitment of the team of teachers, managers and technicians”, says Rita, describing the occasion as very rewarding.

Felipe José, 19, a freshman in Medicine, became interested in the messages transmitted by Bahiana: “the proposal to make a revolution for peace is something that society really needs”. Luiza Martins, 17, a freshman in Psychology, reports that her expectations for the beginning of the course are very good, as it is at the institution she already wanted. For the student, the moment was essential, “because it facilitated the understanding of the objectives of the students and of the institution itself”.

Likewise, Matheus Araújo, 20, a freshman in Medicine, congratulates the positioning of Bahiana, from the first moments to the event: “bringing students closer to the institution in an integrated manner is important not only for their training but also for their professional performance. The warm welcome ends up providing the student with comfort to start the academic journey”.