Open its doors and serve as a field of practice for friendly high schools and partners of Bahiana – this is the main objective of the School at School initiative, conceived and coordinated by the educator and coordinator of People Development at Bahiana, professor Luiza Ribeiro, who, on August 23, hosted the two classes of the 1st grade of high school at Colégio Oficina for practical classes in Biology.

According to Thais, the practical activity takes the student out of the imaginary part, leading him to a real experience: "We are studying the cytology part and, in the classroom, we show the figures on the computer or on the board, but they do not know the cell, from Here they are enchanted when they see what is true and manage to transpose what they study in the classroom to what is real." She highlights the welcoming of the team of professors from the Bahiana who helped her with the development of the program: "Even before arriving here at Bahiana they gave all the north for us to develop the activities. THE Bahiana provided the material, and the teachers are helping with the microscopes and with the classes.... Anyway, it was a great experience."

Juliana Costa Conceição, a student at the Oficina, reveals that, until then, she only liked anatomy, "however, with today's classes, I realized that I really liked the cytology part because it had the resources in 3D, the microscopes". Her colleague Letícia Cardoso reveals that this was her first visit to Bahiana, place he always wanted to visit. "I really liked the environment here, because it's big and has lots of trees. I also found the activities in the laboratory interesting because we could see real things, not just in the book. So, you understand the importance of knowing what's inside you. It's much more interesting, it makes you want to study much more." 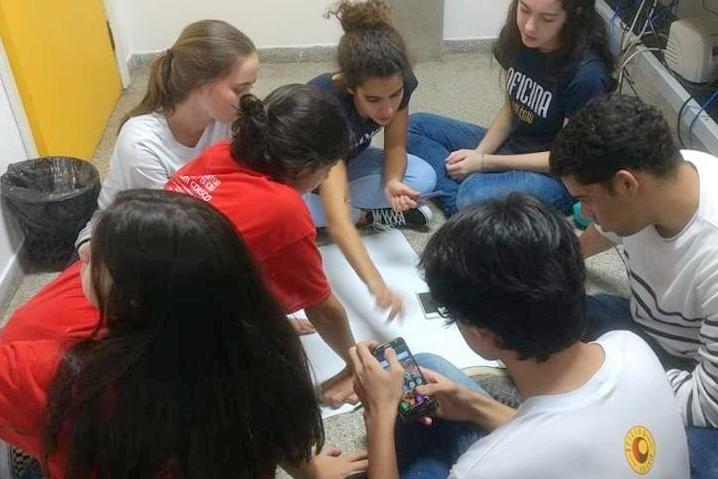 Biomedicine professor Thessika highlights the experience as an opportunity to bring high school students closer to the reality of the university: "It is an enriching experience because, in a way, these boys, who are now in high school, will enter university and this it's a way of bringing them closer to higher education in a more playful way, showing them that the things that are taught in graduation, of course with greater complexity, are nothing very far from what they learn in the classroom."

In August, in addition to this practical activity, Escola na Escola received, on other occasions, 2nd grade high school students from Anglo and Oficina Colleges for the cine-debate, when issues related to bioethics were discussed with teachers of the course. Biomedicine of Bahiana, having as a starting point the films "OKJA" and "Gattaca".


school at school
On the morning of the 15th, the “School at School” took place. Luiza Ribeiro, People Development coordinator, opened the activity, explaining that the program reflects the basic thinking of the Bahiana, which is to be part of an ongoing learning process. “When students enter university, they came from primary, secondary and elementary education. Higher education continues this process”, therefore, as he reported, the action sought to value training environments by integrating the Anglo-Brasileiro College teachers with those from the Bahiana.

According to Luiza, the knowledge of elementary, secondary and higher education teachers is equivalent in relevance, both with regard to the practices of active methodologies and the domain of content. In this way, the program is an incentive to observe the importance of educators in the intellectual, psychological and procedural training of students.

The high school kids watched the movie “Gattaca – Genetic Experience”, by Andrew Niccol. After the session, teachers and students discussed the ethical limits of science regarding the selection of embryos, according to genetic characteristics. Professor Geraldo Ferraro, coordinator of the Biomedicine course, also explained how Biomedicine professionals can act in several areas exemplified in the film.