New from Bahiana and the Culture of Caring

"Culture of Caring: art as a path". This is the theme that will guide the 2018 school year of Novos da Bahiana, which began on the morning of February 15, at the Cabula Academic Unit, with a special reception coordinated by the Núcleo de Attention Psicopedagógico (NAPP), under the management of psychologist Angélica Mendes. New academics from all courses filled auditorium 1 of the Convention Center of the Bahiana, where they were welcomed by the words of the People Development coordinator and educator Luiza Ribeiro. 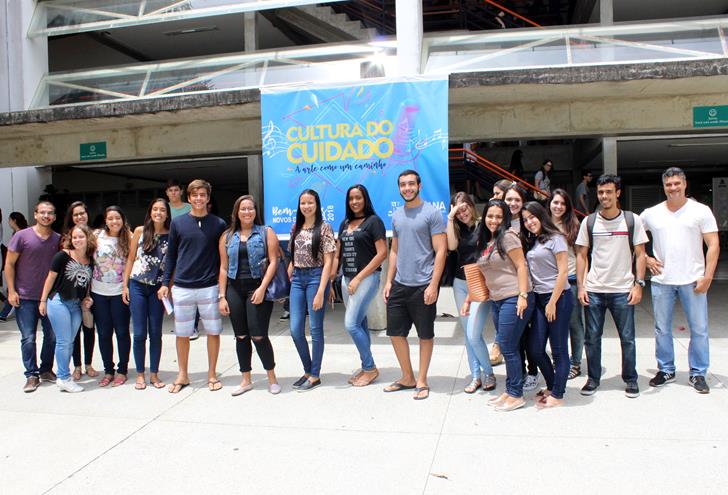 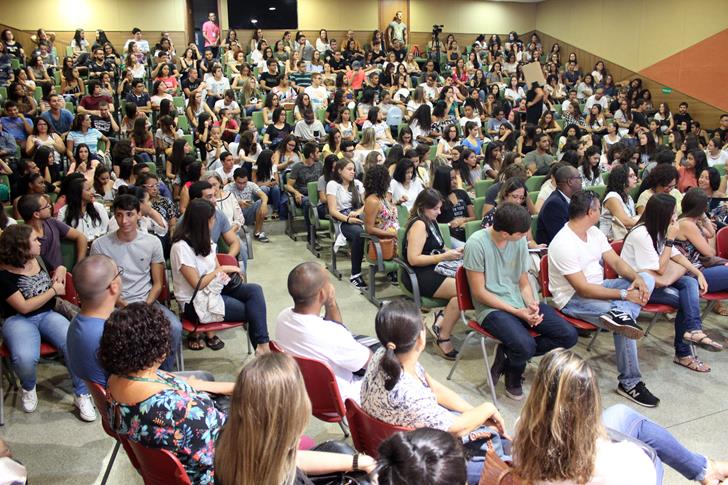 Art as a Way

This year, the New of Bahiana they had a different lecture. The importance of art, self-knowledge and self-care, and the realization of the dream were points addressed by a lecture sung by the musical group "Cruz e os Credos". From Amy Winehouse (“Back to Black”) to Gloria Gaynor (“I will Survive”), through Simon and Garfunkel (“Bridge Over Troubled Water”) and Sinatra (“My Way”), the group formed by young people and led by Kaio Cruz (voice), 9th semester student of Medicine at Bahiana, told the audience about their experiences, expectations and, above all, the experience of how art had direct interference in achieving their personal goals. As the member and bassist of the group, Pedro Araújo, said, "art has this sense of giving a voice to who you are inside". Also part of the group are the recent graduate in Law Rafael Verpal (guitar) and the aviator Victor Deivid (cajon). 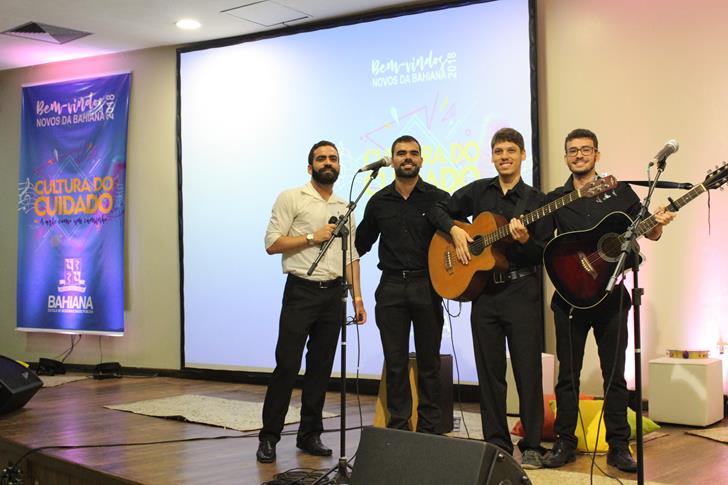 Angélica Mendes explains that the choice of art as the theme for the freshmen reception came from a contact with the group that performed in the 2017 edition of Agosto das Artes. in that way, it made us realize how it is possible to follow an academic trajectory without losing something so valuable that they have, which is their relationship with music," he declared.

She points out that the Bahiana, for a long time, has invested in this formation that is articulated and intertwined with art. "The institution has been opening more and more paths so that teachers, students and collaborators can also make this articulation, and NAPP is a pioneer in this path by creating the Agosto das Artes and the Poetry Circuit". She also states that the space for artistic manifestations has also been growing in the curricular components and in various spaces of the Bahiana.

Let's get out of the box?

During the meeting in the auditorium, Luiza Ribeiro addressed the theme of the Training Selection Process 2018.1 – which this year celebrates 10 years of creation – the "Sair da Caixa". According to her, during the experience, the candidates participated in a dynamic in which they had to carry out a collective activity with a box covering their heads. "We need to tell them, concretely, and since the Selection Process, what is the great entry into the Bahiana, what the institution is proposing: to inconvenience in the best possible way; try to get them out of their comfort zone; of what was already said in the manual. There is no manual. We live and form a health professional in the experience and affection". She says that the feeling of discomfort experienced at that time was later welcomed by the professionals who were there, "through critical reflection on the place we occupy in the world: 'Is this place quiet? Or is it more a place of movement and change? '", clarifies the pedagogue. 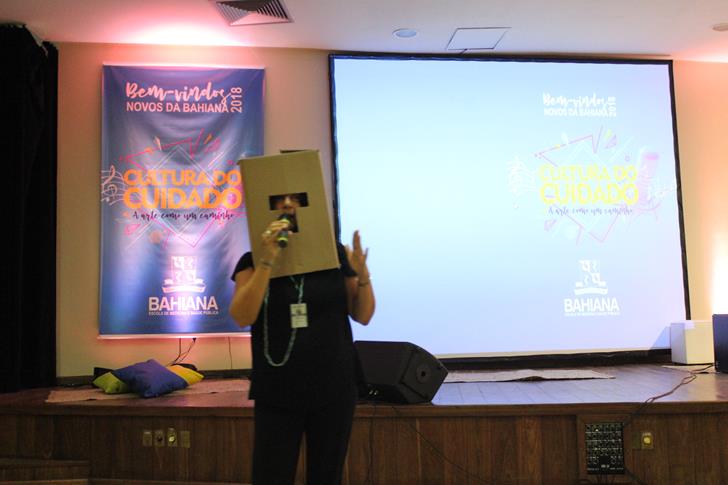 For the freshman of Medicine, Mateus Campos, getting out of the box is related to his personal history with medicine. "First I find my I, my person. I have to find my will and then, from there, I expose myself to the world and want to leave." He says that he suffered from family pressure to follow medicine, but that he only really adopted this path after his process of self-knowledge. "I first tried to find out if I wanted to, and then try. And the result of that is here today", he declares.
Holder of a degree in Physical Education, Nilton César Cardoso Souza joined the bachelor's course at Bahiana. "I researched several institutions to do the bachelor's degree and the one that I liked the most was the Bahiana, both for the proposed content, as well as for the extension activities and for the post-graduation". Employee of the Petrochemical Pole, Nilton says that he always had an affinity with physical activity and that starting to follow this path is also "getting out of the box". "I've always liked it. a lot of Physical Education and now, with stability in the family, I pursued what I always wanted to do: Physical Education".

Coordination of the Common Core

Always innovating and anticipating society's demands, the Bahiana This year launches the Coordination of the Common Nucleus, headed by Professor Luciana Oliveira from the Physiotherapy course. According to her, the idea is for students from all courses to work, since the beginning of their academic trajectory, in an organic way. "THE Bahiana thinks about education and the construction of knowledge in a collective way. The idea is to start developing activities together, bringing together individual courses, because, in the future, this is how they will work. Therefore, this year, we will have a single 2018.1 class that includes students from all courses," she declared. She explains that there are nine curricular components present in all courses and that, throughout the semester, collective activities and meetings will be held. " We believe that this will be another differential of Bahiana from now on," Oliveira said. 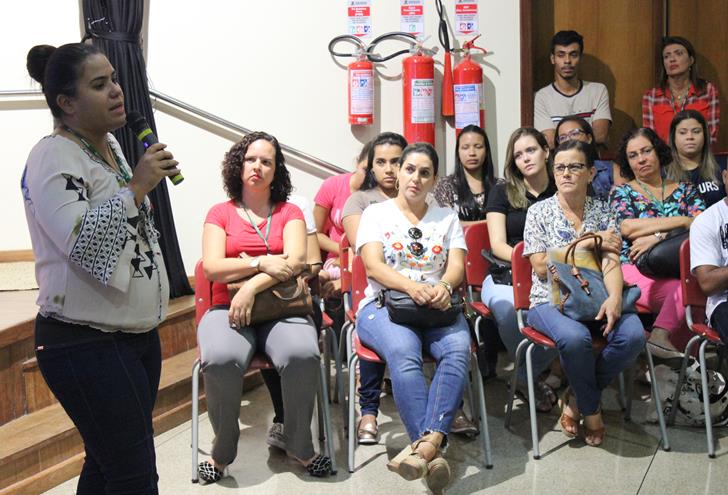 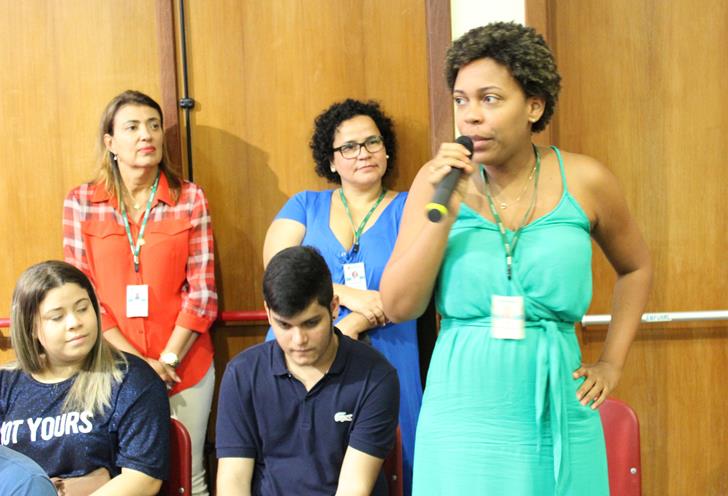 As in previous years, Novos da Bahiana were informed about the institution's anti-hazing policy, which even has a commission, made up of professors, specific to the topic. According to the professor of the Physiotherapy course, Lavinia Boaventura, the commission aims, in addition to welcoming new students, to promote preventive actions in relation to hazing. "THE Bahiana does not tolerate hazing. The student who suffers or witnesses any situation of hazing, must seek the coordination of courses, the NAPP, the Pedagogical Supervision and members of the commission itself”, he warns.


Check out the photos