THE CLASS OF 1958 DA BAHIANA CELEBRATED 50 YEARS OF GRADUATION ON THE LAST DAY 03 OF DECEMBER, AT 10 AM, IN THE NOBLE HALL OF THE SCHOOL OF MEDICINE, IN THE NAZARÉ Academic Unit. ON THE OCCASION, 16 GRADUATES FROM THAT TIME WERE HONORED BY THE SCHOOL. GET TO KNOW A LITTLE OF THE HISTORY OF THE PIONEERS OF THE BAHIANA.

Time travel. This is the feeling of those who have the privilege of spending an afternoon talking with personalities such as Dr. Lia Theresa Savastano Faria Ribeiro, Dr. Lígia Sadigursky Cunha and Dr. Walter Cunha. A trip that can take us to the year 1953, when they joined as students in the pioneer class of the recently launched Escola Bahiana de Medicina e Saúde Pública.

"At that time, there was only the Federal School of Medicine. And a group led by professors such as Dr. Jorge Valente, Antônio Simões, Orlando de Castro Lima,Aristides Novis Filho, Adelaido Ribeiro and others had the idea of ​​creating a new medical school. And then, there was a very tough entrance exam, because many applied and the vacancies were few, only thirty. When the result came out, they had 43 approved. Thus, 13 remained, although they had achieved the grade. We made a movement and sought support from teachers and important people so that these 13 could be part of the group and be admitted. Thus, we were forty-three.” The story is told, in detail, by Dr. Walter Cunha, who was approved in 5th place in the contest.

At this time, Dr. Lia, who took first place in the entrance exam for the Bahiana, shows a newspaper clipping with the news and the list of those approved. "43 candidates approved for the entrance exam of the Escola Bahiana de Medicina e Saúde Pública", she reads, recalling that there were 94 competitors.

According to Dr. Walter Cunha, because it was new, the School was subject to a lot of prejudice and, to face this, Jorge Valente hired internationally and nationally renowned teachers, such as the Uruguayan, Herrera Ramos.

Among the students, the atmosphere was one of total identity. "The difficulties we had at the beginning led to unity and creativity. We did everything to appear, not individually, but as a group, to grow. For example, when we reached the sixth year, paid competitions began and Jorge Valente said ' you have to present yourself well in these contests' and we would present ourselves. We competed with all the other students at Federal and won 80% of the vacancies", says Walter Cunha.

Colleagues say that what was initially seen as a difficulty was later admitted as an advantage. An example of this was the fact that the School works on the premises of Santa Isabel. Being inside a hospital was learning all the time. It was already being acclimated to what would be the day-to-day for the rest of your life. According to Dr. Lia, "some started working right away, because of this".

She says that the facilities of Bahiana, in the beginning, consisted of a large auditorium, a small one, the anatomy room and the laboratories. "We didn't have a canteen and so we used to go to Baranita, which was a bar that was close by", he says.

"Pioneer is just that. Pioneer has to face it" Ligia Sadigursky Wedge 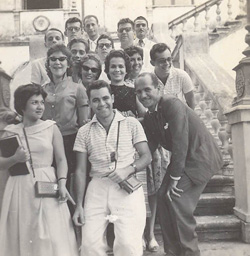 you also need to tidy up the house. And that's what the new students of the Bahiana. Soon they organized and constituted the Academic Directory Pirajá da Silva, whose first president was Carlos Ruy Tourinho.

During this period, the Jornal Estudantil was also launched. the magnifying glass. The first edition, handmade on a sheet of lined paper, cost CR$ 0,10 (ten cents on a cruise) and is still among Dr. Walter Cunha's memorabilia items.

Another mobilization of the group, at the time, was for the parties at the Federal University Residence (Corredor da Vitória), where students gathered. "When we arrived, we would get a password and stay there dancing. At one point, this password was exchanged for a small plate with three sweets and three snacks and a cup of soda. At that time, no one had any money", recalls Dr. Lia Ribeiro .

The culmination of the trajectory was graduation. "At that time, it was very common for the group that was formed to go on a trip to Europe. As we were few, we made raffles and other devices to raise money. Then we had support from some laboratories", says Dr. Walter Cunha.

And for those who think that the surname Cunha of Dr. Walter and Dr. Lígia is pure coincidence, they are wrong. They are the first couple of Bahiana. Yes, they started dating, like many residents today, in the shifts that so many doctors have to give in the exercise of their profession.

These are some of the stories of the 43 pioneers of the Bahiana which were honored at the ceremony on December 03rd. Congratulations to these great doctors who will go down in the history of medicine in Bahia and Bahiana.