The site, which is located in the Youth Center for Science and Culture, received 3D printers acquired by the Face Shield for Life 3D project.

A Bahiana celebrated yet another partnership with the State of Bahia by inaugurating the Hub Maker Salvador space, through the donation of 3D Printers that the institution acquired during the project Face Shield for Life 3D. The opening took place on December 16, and the space is located at the Youth Center for Science and Culture (CJCC), at the headquarters of Colégio Estadual Central, in Nazaré.

“It was a very special day for bringing together different academic bodies and society. An example of effective social action, with more opportunities for everyone", highlighted the professor and dean of Research, Innovation and Postgraduate Studies Stricto Sensu of Bahiana, Atson Fernandes, pointing out that an important cycle has been concluded, “a cycle that began in March 2020 and which had important partners, professors Eduardo Jorge, Elton Barreto, Peterson Cerqueira and Leandro Brito, SESAB, Bahiana, UNEB, UFOB, SEC, more than 60 independent makers, the team of the Dean of Research at Bahiana and the society that financed this project”.

During the Face Shield for Life 3D project, 3 face protection masks were made, using 5D printers, and donated to the health teams that were fighting Covid-19. With that, it was agreed that, later, the printers acquired from the money collected from the society would be destined to the CJCC for students of the public high school network. Thus, the inauguration of Hub Maker Salvador took place as a result of the donation of printers, also including the assembly of computers and configurations for the use of equipment.

Recognition of the Government of the State of Bahia

Thanks to the success and importance of the Face Shield for Life 3D project, not only for the preparation of the PPE for direct protection of health teams in the fight against Covid-19, but also for the impact of the positive action that resulted in the emergence of other groups with similar initiatives , the State Government issued a Letter of Appreciation in recognition of the project carried out (attachment).

Face Shiel for Life 3D project brings together researchers from teaching and research institutions throughout Bahia. 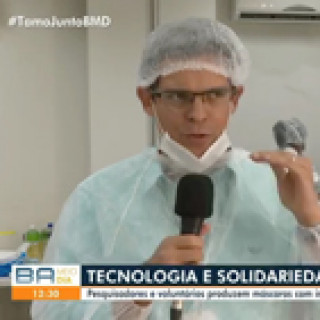 Bahiana in the media

Researchers and volunteers produce masks with 3D printers and donate them to hospitals in Bahia. Check out, in the video, an excerpt from Jornal Bahia Meio Dia aired today, 27/03/2020, on TV Bahia, and which featured an interview with one of the researchers in front of the Face Shield for Life 3D Project: Prof. Dr. Atson Souza Fernandes - Dean of Research, Innovation and Stricto Sensu Graduate Studies at Bahiana.